Sports can bring out all types of emotions. I have seen someone yell, laugh, and cry all in the short amount of 5 minutes (this is not an Aggie joke, so before someone says something, I will make it myself).

The emotions are what makes the sport in my eyes. You need the anger, the fear, the pride, the sudden ah-hah, and tears of joy after you successfully hurdled over your opponent. Now, here is the kicker; the term  Fair-Weather. A fan of a sports team who only shows support when the team is doing well. During the hard times they usually bandwagon other teams. They are fun, and a real mystery because they manage to have no real loyalty to the team. Sometimes, just for an uproar, they can even manage to get better seats than you at the game. Strangely though, at the first sign of fire, they vanish, but, they always return.

Now, the question is, Texans and Cowboys; Which of the two is more loyal? These Texas’ Teams have competition in regards to the loyalty of the fan base. In my defense, I am completely unbiased when it comes to sports; I am a lover of the organization as a whole.  This being said, and in my opinion,  the Dallas Cowboys operate and treat outsiders, especially the little people, “Top Notch.” The customer service, their word, and no matter the record, have all been 100 percent.

Today, the Houston Texans and the New Orleans Saints are matching up in Houston, Texas at NRG Stadium.  The Texans just broke the Cincinnati Bengals winning streak last Monday and are picked to beat the New Orleans Saints. Myself, and another were supposed to be on the sidelines for this game (it was planned for months), but, something happened, a Texans Win last Monday. Mic Drops Now….. 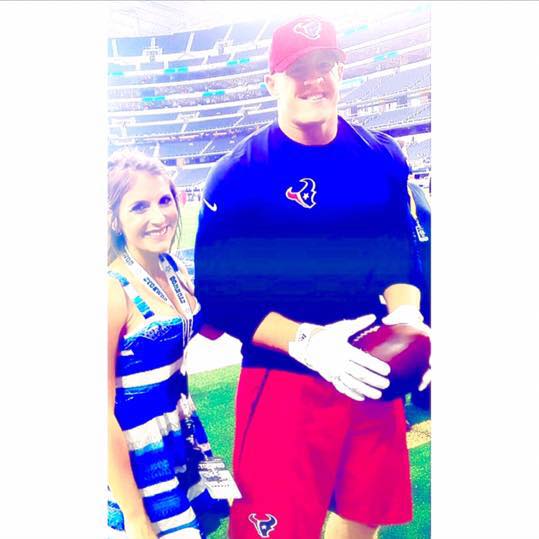 JJ Watt, and myself at AT&T Stadium pre-season. I was speaking to him in regards of his foundation before the game against the Dallas Cowboys.